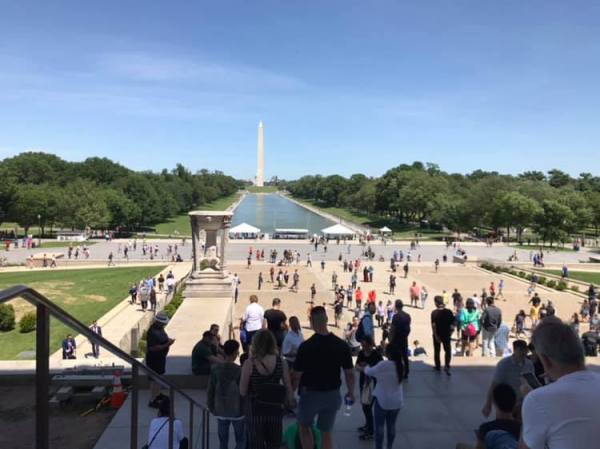 Travelling is one of my favorite things to do.  It is always enjoyable to go to unfamiliar places and experience new things.  A few weeks ago Amanda and I flew to visit Washington D.C.  This is a city that we had been to before.  However, because I love history so much, it is a city that I could visit time and time again.  The city is full of memorials to past presidents, fallen soldiers, and those who have helped lay the foundations of the United States.  It is also a place where one can see the buildings where the gears of our republic spin.

The last time Amanda and I travelled to Washington D.C. we only had about a day and a half to try and squeeze as much sightseeing in as possible.  However, on our latest trip we had four days to explore the city, which was still not enough time, but it was a memorable time nonetheless.

We got to visit some of my favorite sights in the city, such as the Lincoln Memorial and the Vietnam Memorial.  These are two places where one can feel both pride and sadness.  The Lincoln Memorial to me is such an awe-inspiring sight.  The statue of Abraham Lincoln, who was perhaps our greatest president, is such a beautiful sculpture.  It is a peaceful place where people are quite reverential as they pass through the great marble hall where the immense statue of Lincoln sits.

This is a place where one can take in just how perfectly laid out the city is in relation to how the buildings and monuments are situated.  Looking out from where Lincoln sits, one can see the Washington Monument, which is reflected in the pool that sits in front of the Lincoln Memorial.  Lined up perfectly with the Washington Monument and the Lincoln Memorial, is the U.S. Capitol building.

Just a short distance from the Lincoln Memorial is a site that brings me great sadness when I see it.  That is the Vietnam Memorial.  This is a giant wall sculpted out of highly polished, black granite, on which all of those who lost their lives during the war are inscribed.  This is a stark reminder of how senseless war can be.  The names of more than 58,000 men and women are inscribed upon this slab of granite.  They will never be forgotten.  Being at this site on Memorial Day was a very poignant experience, as we got to see some of the men and women who did make it back home.  They were there to honor their friends who were not so fortunate.  I respect the sacrifices that all of these people made to serve a country which often did not welcome them back home with open arms.

Amanda and I were also able to visit the World War II Memorial.  This is a beautiful place, where one can’t help but reflect on all the people who fought to liberate Europe and other parts of the world from the evils of the Third Reich.  I am glad that we were able to be there to see these sites on Memorial Day, a day which Americans honor those who have died for the cause of freedom.

I think one of the places that everyone should visit while in Washington D.C. is the U.S. Holocaust Memorial Museum.  One must visit this place to keep the memory alive of those  who died under the evil oppression of Adolf Hitler.  I am dumbfounded that there are still people who deny that these events ever took place.  Hitler and the Nazis were proud of what they were trying to accomplish and therefore were pleased to document the atrocities which they were committing.  There is no denying theses facts.  Over six million Jews were killed because they were thought sub-human.

Being a person who is disabled, it also infuriates me to know that I would have been included among those whom Hitler thought of being “less than human.”  This was a shameful time in history, where many lives could have been spared, if the world would have not turned a blind eye to the suffering of those in Europe.  This includes the United States, who denied entry to thousands of Jews simply because we didn’t want to deal with an influx of refugees who needed a safe place to live.  It is shameful to know that genocide is still taking place in different parts of the world.  I strongly believe that every human was created in the image of God.  Therefore, we should treat each other with love and respect.

As often happens when I am in a city in which I am unfamiliar, there are those who do live up to the standard of treating others with love and respect.  I had many people willing to help me as I wheeled my way throughout the city.  For instance, as I was rolling along, making my way to the Lincoln Memorial, I was asked if I needed help getting up a rather steep incline by a woman who I assume was just resident of Washington D.C.  This woman appeared to be out for a jog, but she took some time away from her run to push me up a hill and into the area where I was able to catch the elevator up to see the statue of Abraham Lincoln.  I don’t know this woman’s name, but she showed me compassion, to which I was very thankful.

Washington D.C. is a very accessible city to those with disabilities.  Every metro stop had an elevator down to the subway.  Likewise, every train was even with the platform, which made rolling into the train car very easy from my wheelchair.  Moreover, most, if not all of the monuments and museums have ramps or elevators, which make access very easy.  Finally, the city busses, which are free for everyone to ride, all have ramps which allow easy access for wheelchair users.

One final event that made this trip so memorable was being able to visit Arlington National Cemetery, where many fallen soldiers are buried.  Arlington is also home to the gravesites of John F. Kennedy, along with his brother Robert F. Kennedy.  However, the most moving part of this cemetery is the Tomb of the Unknown Soldier.  Amanda and I were fortunate to visit the cemetery on Memorial Day where the Vice President of the United States, along with other dignitaries spoke, honoring those who have died fighting for the United States around the world.