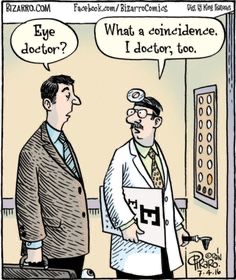 This past Saturday my eyes started playing tricks on me. When I woke up I saw flashes of light in the corner of my left eye. These flashes were accompanied by floating specks and pin-point sized dots. Being the hypochondriac that I am, I thought perhaps I might be having a stroke. Despite this, I decided I’d wait to see if it would all just go away. Likewise, I consulted Google to see what my symptoms might mean.

I decided that I probably had a tear in my retina, or there was a chance that it was diabetic retinopathy. However, I tried to put these things out of my mind. I then spent the rest of the day on Saturday trying to rest my eyes as much as I could.

On Sunday, I woke up and the same flashes of light were there, as were the “floaters.” Again, I thought I’d wait another day to see if my symptoms would subside. However, by yesterday morning they had not. Well, the flashes of light had disappeared but the “floaters” were still present. This is when I decided I’d call my doctor. My doctor got me in almost right away.

Going to the doctor in the midst of a global pandemic is quite the experience. Obviously, you are required to wear a mask. After you fill out the paperwork they give you at reception, you are allowed to keep the pen. If I’d have known there was a free pen involved I’d have not hesitated for a second about scheduling an appointment. However, my favorite part of the day was the card I was handed before I sat down.

It looked like a flashcard that school children would use to practice their sight words. On the card was the word “dirty,” printed in nice block letters. I thought I smelled pretty good, but apparently not. Anyway, I was instructed to leave this card on my seat in the waiting room after I was called back for my exam. This was so the receptionist would be reminded to disinfect my seat.

Fortunately, nothing abnormal was detected during my exam. The doctor explained to me that the eye contains a jelly-like fluid called vitreous humor. This fluid fills the space between the lens and the retina in the eye. Apparently, as a person gets older the vitreous humour begins to liquify and shrink. The collagen and proteins that are present within the vitreous humor then become stringy and can begin to float around the eye. So, I basically found out I am becoming an old man who will see “floaters” in his eye for at least a little while.

Better still, I will be getting my first pair of bifocals in a few weeks. I am not sure how I feel about this. I am going to have a difficult time adjusting to them, I imagine. However, at least now I won’t have to take my glasses off to read things that are close to my face.

Hopefully, I won’t have to go to the doctor again anytime soon. Although, it might be a great way to start a new pen collection.